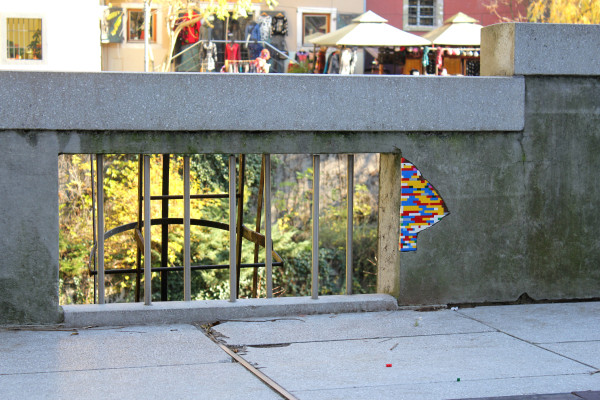 Process
»Dispatchwork was first initiated in 2007, and it has changed its faces a lot since then. For example, it has taken this new form of a workshop, and it has also adopted the concept of a self-organized guerrilla kind of action, when people all over the world do the project without me being present and send me their photos, which I then publish on the dispachement.info website.
There is also a forum, which is slowly working with people who sign up to create their events or announce them. The last event took place in Mexico, for example. So this is the new side of the project, which I did not plan and which was not its initial idea.
Initially, Dispatchwork grew as a response to the architectual style of the city Bocchignano, Italy, where regular bricks were used to build the houses. So basically, the integrity of the structure was more important than the design. They would not just demolish the entire house if they did not have the fitting bricks, which reminded me of children’s building structures, where they have a limited amount of bricks, and they rather use the same shape than the same colour.

Transferring meaning
Afterwards, I was invited to Tel Aviv, where walls have a very different meaning because of the separation and they hold a strong political connotation. In Berlin, people were invited to join the project for the first time. We were working on a wall that was destroyed by the shootings during the Second World War, so the project got a completely political component in that case.
Now, I try to choose special places, but since there are different layers of work, I do not mind repairing whatever wall is hidden in a dark corner where nobody ever goes.

Randomness / Surprise
What I really like with this project is the moment of surprise. I am also influenced by graffiti, where nothing really matters, as long as you put something on the wall, so it is an “I was here” kind of statement. This layer is present in my work too, so when I go to a boring city (a city where nothing really happens), I still find a wall to leave my sign on.
So I am oscillating between the more important walls that I might chose just to point something out, and then I also point it out on my webpage in order to explain the background of the structure. But sometimes my choice could also be a regular wall of a regular house.

Crossing barriers and looking for common languages
Right now, what I am focused on, as a sculptor, is the use of comprehensible artistic imagery. I have travelled throughout the world a little bit, and I have found many similarities. It has always been my wish, my vision, to find out if nationality and personal identity could actually work without culture. I wanted to explore if people need nationality, if perhaps language is the only barrier between them, and not culture, in the way that people all over the world approach objects in a similar way.
For example, I work with plastic construction bricks that are widely known all over the world, in many industrialized countries, with soap bubbles, which are also quite well-known all over the world, with plain dice, which I use because it is a recognisable object, and also with the idea of a simple object being a carrier of symbolic value, which lures people into much deeper reflections. It is a matter of time. Let us take the Soap-bubble Life Extension Machine for example. First, there is the soap bubble as an internationally recognised object of fragility, the ephemeral existence of objects, maybe even of animals, living things. This Soap-bubble Life Extension Machine conserves the soap bubble forever, changing this image and reflecting upon things, such as medicine and processes of modern technology for extension of life (for example).

Permanence : temporariness
We live in a world where everything changes all the time. Our bodies, for instance, are constantly in a transitory state. We take nutrition and discharge unnecessary things; we are constantly losing our skin, reproducing the skin and blood, etc.
In my recent I have worked with moments of temporariness a lot in my recent works. I either try to make the time stop by preventing soap bubbles from bursting, or making the dice stop rolling, or I try to make something break down on purpose by using different machines. Maybe is also related to the art market, thinking about what you can sell, how much can a collector collect from a broken machine, etc.
I try to work with the fact that the world is very impermanent (constantly changing) and also very relative in time, for example those moments that seems to last forever or other ones that seem very short.
The project is also a test on how a neighborhood accepts or reacts to the intervention. In some neighbourhoods, people take care of it, so it stays there for a long time, in others, they take the toys because they need them. In public space everything is a fair game. So it depends.. I have however never glued anything down.
To me, permanence is not really important. It doesn´t matter how many people I reach with a patch. And there is the other side of the project – documentation and photography, where it will be captured for ever.
I also like the idea of playing with expectations and deceit. People see the patch in their own city on the internet and when they come to the venue, it´s no longer there.