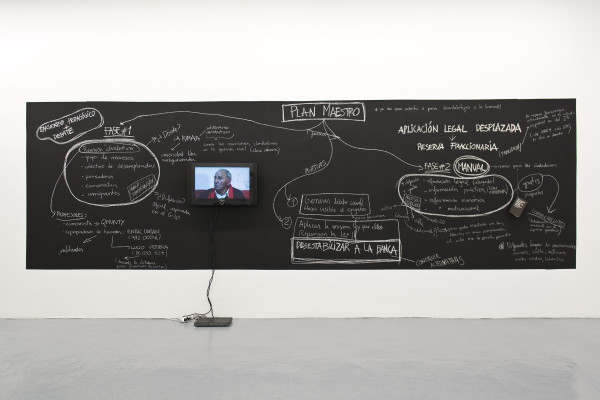 In Displaced Legal Application #1: Fractional Reserve, Núria Güell defines a master plan which proposes to apply the Fractional Reserve system to banks, the same law that banks apply to their clients and which allows them to create money out of nothing, generating it as debt and enslaving the population.
In order to do this, she created various means to inform and educate the public on how to expropriate money from banks. The first phase was to carry out an educational meeting entitled “How to ex­propriate money from the bank” with expropriators Lucio Urtubia and Enric Duran, and economist Qmunty, where they explained diffe­rent strategies of expropriation as well as the actual strategy banks currently use to create money. The second phase was the crea­tion and publication of a manual containing various expropria­tion strategies, legal consultation and analytical texts.

Too big to fail: a peculiar justification given by the government to take away public resources and hand them over to banks. The more perverse and corrupt they were, the more rewards they obtained. It all started with the Fractional Reserve System, which is the legal privilege that the States ceded to financial institutions to create money from nothing, thus allowing them to loan its customers’ deposit money to make a credit expansion and achieve exponential growth in earnings. And it seemed they were going to fall, but were rescued. Placing on our backs an extraordinary debt that does not belong to us and that we are required to return through budget cuts and by decrees, we have been condemned to impoverishment, family instability, the dismantling of public services, in order to fatten the odious mass grave in the Strait of Gibraltar, the consumption of tranquilizers, and the loss of a future.
Lucio Urtubia counterfeited $20 million dollars in Citibank checks in order to contribute them to the antifascist struggle during the Spanish dictatorship. Human betrayal put him behind bars, although only for six months. “Anarchists are the kings of the arts”, Lucio always says. Citibank wanted the impeccable printing plates that made them lose capital and legitimacy. His wits won the day: “First of all, get me out of jail so I can hand over the plates in exchange for the millions I ask, and I promise the counterfeit checks will stop circulating.”
Enric Duran, a Catalan activist, expropriated €500,000 from banks to allocate them to anticapitalist initiatives. He made this public, assuming the risk and consequences. Enric chose not to legitimize the judicial system, and preferred to go underground.
I called Enric and Lucio. I needed their involvement to conduct a Displaced Legal Application to the Fractional Reserve System, as I had defined a master plan that sought to apply to the banks the same law they applied to their clients. They were surprised when I told them we could use the autonomy of art as an “umbrella” to use certain illegalities as a significant resource, the financial and human resources of art institutions as a means and as a framework to make the imagined possible and to leverage media exposure in order to expand the audiences and those addressed.
So Enric and Lucio went from being expropriation militants to being teachers, participating in various delivery platforms and training citizens on strategies to expropriate money from banking entities. After the completion of the pedagogical encounter entitled “How can we expropriate money from the banks?,”, I published a manual with different expropriation strategies, legal and economic analyses, and reflective texts for free distribution in public space and on the web.
The methodology is simple: it consists of applying for several loans at different banks in parallel so that they do not know you are applying for many loans simultaneously. The documentation requested in order to obtain the credit can be forged. As banks are private companies, at least in Spain, they cannot check your personal information. You pay the first instalments and when you have already applied for all the credits you want, you declare insolvency and stop paying the fees, getting to keep all the money. The banks will think you are one of the thousands of customers that due to the crisis cannot repay their debts. In order to avoid any legal entrapments, it is imperative to state that the intention from the outset was to repay the loans and that, despite the counterfeiting of documents, there was no premeditation to not repay them.
Sharing strategies, fears, and above all desires, empowers us and gives us the feeling of a togetherness that is more powerful than the power itself. The project was appropriated by others, creating small groups and organizing clandestine meetings to create future strategies and set up future actions. And then came the moment I had to position myself: direct action or art?