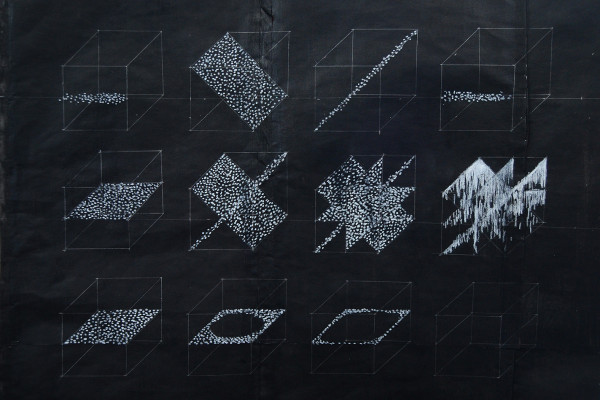 Can you tell us something about your professional background?

Well, my professional background comes from fields that are very different from what I am doing now. I have background in music and in fine arts, and I started my art school as a painter. I could only draw, and during those years I kind of had the opportunity to look at what I liked, and I started experimenting with different media, and yeah, it kind of developed more into this interdisciplinary attitude where I started to become really interested in sound, because it connects us to a space, and it gives us the feeling of being in a place, which I found very interesting.

I became aware of it for the first time when I had a group of drawings, and the way I placed them into space really influenced the meaning of the whole piece. The drawings became one work, you make connections between one work and another and it kind of makes a story. I also discovered that space became part of the work as well. And after this, I was started to move more towards site-specific works, where I kind of transform the space with very simple, yet very effective means.

Could you give us an example?

An example would be my work for my Bachelor in Fine Arts: I had a room with three windows, and I made these three big black triangles that kind of seemed to invade the room, it seemed like an implosion that came into the room, and on the floor, I had a grid of elastics in the form of a structure of a crystal, and at the same time there was sound playing continuously and, yes, in a way, I transformed the space. Also, it makes the viewers not really know how to behave in a space, and it kind of challenges them too.

How would you describe ArtScience?

The funny thing is that I never chose to do ArtScience. I think it was because of the works I became interested in, the ones I saw during festivals in Holland, they really played with your perception, and you know, how you perceive space and time with sound and image, that combination. Then I kind of realised what kind of works I like and I wanted to make those works too.

What are you working on here at MoTA residency?
I am currently developing some prototypes for my new work that are a continuation of the last piece I made, the one I presented here at Sonica 2012. It was called “Repetition at my distance” and it was a field of sixteen lightwires with motors, sound and light. And now, I want to develop these techniques to a greater extent, but with different materials and with different methods of constructing light, sound and movement.

For example, what kind of prototypes?
It started with an image of a white swarm floating in a dark space. It was made out of very tiny particles, and they created both geometrical and organic form, and that is what I am trying to make tangible. And with these prototypes I would like to create entities that I would like to duplicate, and these entities should be very simple, but they should also be able to express many different things.

How is it connected to your previous work?

The method of constructing the piece is actually the second part; the first part is the making-of part, it’s like building a new instrument. The second part consists of thinking about what I can do with what I had already made, so it’s more like the development in time. For the part of the composition, I got inspired by the complex swarm behaviour, like the things you can see in nature: , the big flock of birds flying in the sky or a big group of fish in the sea, but this behaviour is also used a lot in the virtual world, movies and video games, and this is the behaviour that I would like to make tangible in my installations. And I am not necessarily interested in how it is made, I need to learn about that too, but for me, the experience of the behaviour is more important, as well as the fact of making something that is different from this behaviour, something more than it originally is and that it speaks more to the imagination of the perceiver.

Is what you are working on a total installation? What does it mean?
Nowadays, every installation art, every art can be called an installation when it’s a collection of several pieces put together. For me, the definition of the total installation is that it transforms the whole space, which means that also the architectural space is transformed together with the work. And that these two works kind of intersect with each other.

How is your work here site-specific?
It may not be as site-specific as my works before, but sometimes it really depends, the space really influences how you see the work. For example, the dimensions of my last work, the installation “Repetition at my distance”, are three by three by three, but it doesn’t mean it has to be in a space with the same dimensions; this work needs a lot of space around it or else it transforms the whole space.

Which educational spaces do you use, do you often go to residencies?
This is actually my first residency. I graduated not so long ago, like a year ago. But I really like the environment where you work and really focus on one thing, a very inspiring environment with people from different fields. Working in the same field like other artists is really nice, you can learn from each other. You don’t have much of this in school. In school, the only thing you have are people making things around you.

What other spaces do you use for your development as an artist?
We have in the Hague a few places where we go that are specialised in art, and I think they are important.

You have a blog for your audience. Who is your audience?
At first, it was meant more for myself, to make connections with what I’m working on, what things inspire me. But then I also figured that it would be nice if the audience sees what I’m doing. The fact is that when I start to work, I have no idea how it will turn out to be, it can be something completely different than the first image. I keep a record of the process. For me, it’s the first time to really document the process. I hope to reach a broader audience; what I do in my works is not so complicated to understand. It is not so conceptual as most of the contemporary art. It speaks much more to the direct experience of the perceiver. In the way I am working, I see it more as experiencing music.