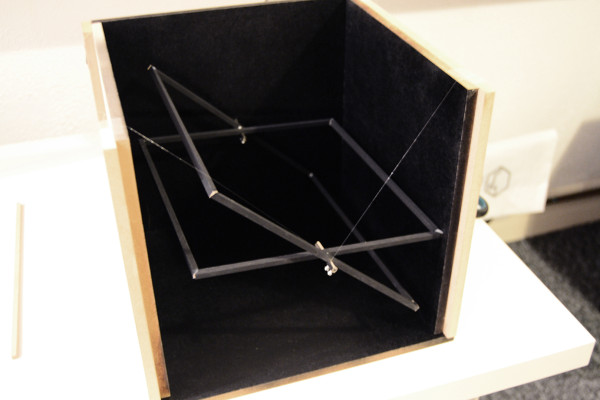 “))))) repetition at my distance”. I would like to develop the same mechanics and techniques
but with different materials and uses.
As a result of the findings of my previous work, I got inspired by the phenomenon of swarm behaviour. This mysterious behaviour occurs in a collective group of animals and
appears in many living species such as birds, fish, insects, bacteria or a herd of land animals. It consists of simple rules that are followed by individuals. From one moment to the next, they transform into a super organism where any control from a central conductor
seems to be absent.

By taking the flocking behaviour as a starting point, I would like to explore the way a group
can transcend the behaviour of the individual and the way it takes effect in space and time.
What does the audience experience? Do new meanings arise?

This behaviour doesn’t only occur in nature, but also in the virtual worlds of movies and video games. By means of these paths, I would like to make this tangible in a kinetic-light-sound installation that plays directly to our experience and imagination.

Introduction research
Since I’ve always approached my work from a subjective point of view, I’m curious about the way
existing rules can influence my work. By taking ideas from the cybernetics, algorithmic
composition or processes in nature, I would like to discover other ways to construct light,
sound and movement. I’m not very familiar yet with these subjects, but they became
inevitable after making “))))) repetition at my distance”. It has awoken my curiosity about
harmony and disharmony between the machine, human, animal and nature. This
installation revealed strong parallels with these still unfamiliar subjects that are becoming
more and more important for the artistic development of my work.

Development research
When I start on a new project, I never know how the end result will turn out to be. However, it always starts
with an undefined, yet clear image. This can be a colour, a sound or a form.
The first image I had for this new project was a white swarm made of small particles in a dark
space. Exploring their surroundings as a haze, they form all sorts of geometrical and
organic forms. However, these are forms that could never be made by a normal swarm in
reality.
This image served as a starting point to develop entities in constructions and scale models that can
make this feeling tangible.
During my residency at MoTA, I continued developing the entities that I was working on. I made three prototypes that not only control a set of groups differently, but also explore different approaches of light, sound and movement in techniques and material.
For example:
Sound:
– Generated by the physical mechanism itself or recorded material that resembles swarms? This can be a combination of field recordings and synthetic sound.
– Creating spatiality through, for example, the Doppler effect: the rotation of a sound source
makes us believe that the sound is far away and close by at the same time.

Light:
– Exploring various ways of control that influence what we see (PWM, DA-­conversion, frequency).
– Various light sources of white light: what can I do with the after effects and different colours that are created through the mix of flickering light and the perception of the eye?

Motors and physical material (constructions):
– What sculptural space can I create with light and sound? What does it evoke?

After exploring the possibilities of these prototypes, I want to choose one of them for further development, make multiple of these, and make short compositions for them.

Since the making process of the units takes a lot of time, I’m also working on simulations that can serve as a graphic notation. They are expressed with drawings or simulations in
Software and are an abstract guidance for the development in time and space.

To document the process, I started a blog. It contains the documentation of the work, references
to texts and other works of artists that are within the context of my research. I will
continue to update this during and after the residency.